Tempting Tuesday...Shower Solitude Or Not 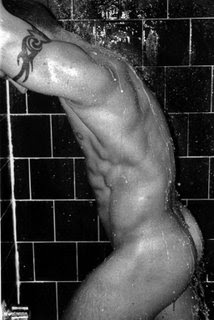 After several exhausting hours of shedding blood from both sides of the war, Dante longed for a moment of solitude.  But only a short one.  With his mind racing and the blood pumping through his veins at rapid speed, he ached for a woman and not just any one would do.  Hell, the instant thought of the petite redhead jerked his cock to attention.

Great.  Now dealing with a throbbing erection and deep need for scrubbing away the ugliness of the day's events along with the blood, he stepped into his private shower.  Or so he thought.

Not knowing exactly when or if the Captain had returned from the front, Claire hesitated with entering the male's living area.  Always the need to please, she quietly carried the fresh linens and placed them on the Captain's bed.  The simple gesture measured volumes in this world's harsh surroundings.

As she turned to leave, the sound of spraying water drew her eyes towards the bath area.  Her breath caught on a silent gasp.  Holy hell.  Not quite believing the scene in front of her, she blinked several times thinking to clear her vision.  No such luck there or maybe it was.  The openness of the bathroom door offered the perfect view of Captain Dante Sterling in all his magnificent glory.

Claire's gaze roamed over the male's powerful form.  The Captain's forearms held his stature as he leaned into the shower's spray.  His head hung low as the water sluiced over his broad back.  Powerful thighs and strong ass cheeks accentuated the beauty and harsh reality of his physique.  He was built for battle...and pleasure. Flushed by the thought, Claire swiped her brow from the spike of her body temperature.

Although undetected by Dante, she knew being there was highly inappropriate.  One due to his rank and two due to her strong attraction towards the man.  Besides, why would the all mighty Captain be interested in a lowly space vermin such as herself.  She was only a servant and a half breed at that.  Yet, she still couldn't tear her eyes away from the man she craved more than life itself.

As if reading her thoughts, Dante's muscled body twisted around offering her more to gaze upon. Lathering soap onto his hands, he reached down and gripped his cock.

Claire stared with fascination as the beautiful male's hands encircled his penis.  She couldn't breathe.  She didn't dare.  He fisted and stroked the hard length in vigorous form.  Slow. Fast. Slow. Fast.  Faster. A continuous rhythm synchronized with her own heart beat.  Wet liquid heat pooled between her thighs while she wished she was in that shower with this man.

Dante moaned as his hands slicked along his erection.  He desperately needed release.  Not exactly how he wanted it but images of the woman he desired ran through  his mind and fueled his lust.  His thumb slid over the head's tip, precum oozed from it.  So close.  He was so fucking close.  Then as his climax roared to the surface, he too gritted out his fantasy lover's name just has he locked eyes on the object of  his desire...Claire.
Posted by J D Elliott at 8:16 AM