Thoughtful Thursday...What's In a Name? 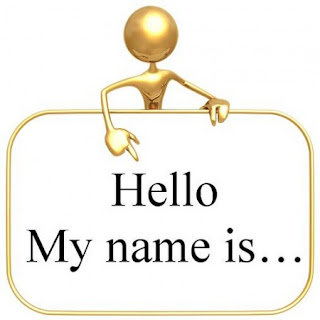 As a writer, I love researching names for characters.  It intrigues me when I discover the meaning behind it and the history of its origin.  I often pick a name for a certain character based on their personality or ethnic background.  The connection between the name and the person who holds it should be real and personable.  I think it's the same way with people.  There are times when I meet a person and I think he/she sure doesn't fit their name sake.  As I walk away from the person, I mentally shake my head thinking, "What the hell were his/her parents thinking?"  When the name is so atrocious, I can't help but feel anxious and a little perturbed regarding the person's predicament.

Years ago, someone told me that he/she had a family member named 'Richard Head' but they called him 'Dick Head'...Why?  Then this person grew up and had children of his own.  In fact a son named after the father.  You guessed right.  Richard Head Jr was the name.  Now to distinguish between the two Richards, the family decided to call the dad, Big Dick, and the son, Little Dick.  And again I ask "WHY?"  Did anyone ever stop to think about the repercussions this would have on either person whether within the community, school, or work. Hell, even within their own family.  Don't get me wrong, Richard is a wonderful name; yet it doesn't quite work out with this particular surname.


As for my pen name, J D Elliott has significant meaning to me and I hold it dear to my heart.  The name J D comes from my Dad who is no longer living.  Jewell David was his legal birth name.  Jewell means 'precious stone' and David means 'beloved'.  Both those names fit him quite well.  He definitely lived up to their meanings.

Elliott means 'The LORD is my GOD' and it originally comes from the name Elijah.  The funny thing is that I named my cat, Elliott, when I first got her 18 years ago.  At the time I was in my early twenties and had a big crush on Def Leppard's lead singer, Joe Elliott; thus, there came the name for my cat.  I know it sounds pretty typical of young person; however, I still love the band, singer, and the name Elliott.  Plus it totally fits my cat's unique personality.

When I was deciding on a pen name, both names quickly came to mind. I wanted to honor Dad in some way and the use of his name was a perfect choice.  In fact, I believe Dad would approve and get a kick out of it.  My cat, Elliott, is my baby so it was obvious that her name became the other half of my pen name as well.  I believe both names compliment each other and sound quite catchy.

My birthname, Kellie, originates from the Irish form of the name, Kelly, which means 'brave warrior'.  I have also found that it means 'bright headed'.  So yeah, I believe my name fits my personality.  Thank you, Mom and Dad for a fabulous name sake.

The point is a name should be sacred and valued and not teased or ridiculed. One should consider if a name will honor the person or embarrass him/her? So whenever you name your next child, pet, or hero/heroine, please consider if the name actually fits the personality and if its one that you'll be proud to say as well.