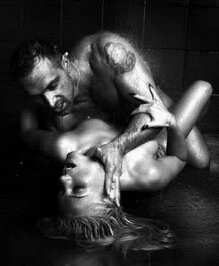 After all the shit that played out over the past few months for Maria and Stefan they needed a release.  Release from all the pain, hurt, and betrayal from various people in their lives.  Family and friends became more obsolete for them.  It became apparent that many didn't trust in their love; therefore, didn't even trust in their decisions regardless if it made Maria and Stefan happy. Sad. Really sad.  The truth of the matter was, they relied solely on one another.  People really didn't care whether the two were soul mates.  Yet, they were in fact and then some.  So when it was all said and done, the anguish from the people who supposedly ﻿'stuck by them no matter the situation' proved they only supported and loved Maria and Stefan when it would somehow benefit them as well.

Maria wept when Stefan held her as she released the hurt she received from another family member.  Hitting the wall and screaming with rage, his fury ignited within his body knowing she ached.  He didn't want to damage her any further; yet, when their passion burned from their love and the stupidity from others, something snapped for both of them.  Grabbing her tear-streaked face, he rained kisses all over her cheeks.  The more he kissed, the more he yearned for her.  She returned his kisses with an equal fervor.  Wrapping her legs around her man, she needed him closer more now than ever.  All the heartache and turmoil from betrayal spilled over into their frantic need for one another.  Driving Maria to the floor, Stefan groped her luscious body with the intent to rid her of any remnants of lingering wounds from others.  He wanted his touch to heal her, where any past offenses from others were easily forgotten.  He desired her smile and laughter not only for herself but for the healing of his scars, too.

Somehow they both would survive and come out on top again.  They had each other for support and unconditional love.  Everything else didn't really matter.  Only their love and trust proved concrete for them and that's what really counted.