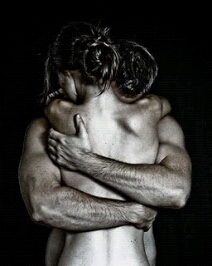 Once the police come and gone, Laney's knees finally buckled from the day's chaos.  Her head ached from the ugliness she'd witnessed in the last twenty-four hours.  If she saw anything with crimson red in it or on it, she'd probably have herself committed to an asylum.  That's how badly the day fucked with her head.  Now, all she craved was peace of mind and restful sleep.  If only that could happen soon.

As Laney struggled to gather the strength to leave her once safe haven: home, the screams of her best friend tortured Laney's now fragile mind.  She needed to get far away from the pain.  Her body still shook from the terror of seeing Abigail's petite frame beaten black and blue.  Not an inch of her body was spared from the hours of brutality spent on her.  Laney threw up from the site alone; not to mention the distressed phone call she received while Abigail was being victimized.  The whole sick, twisted event caused her insides to tighten with fear and dread.  She ultimately knew the end result.  Unfortunately, she'd seen it time and time again; yet, this was the first time it had hit so close to home.  Laney actually had a relationship with the victim this time.  Abigail.  It was bad enough that these perverted crimes happened but throw in a person whom she knew and all bets were off.  God, she hated that.

Laney made her way back to Eric's place.  He was the one person who calmed her.  He always had a soothing effect on her.  Today, she needed his strength more than ever.

Pushing open the front door, Laney entered the living room and dropped her duffel bag on the floor.  She wasn't even thinking about unpacking at that moment.  She just needed him.  "Eric!"  She cried as she stumbled into the hallway towards the kitchen.  The sound of pots banging clued her in that he was most likely in there.

"What?  I'm in here, Laney.  What's..."  He stopped abruptly at the sight of Laney's disheveled appearance.  Her eyes conveyed the look of a crazed woman.  He instantly ran to her.  "Baby, what happened?"

As soon has he touched her, the tears flowed down Laney's cheeks.  "Ab...Ab...Abi..Abigail."

"What about her?"  His green eyes narrowed in on hers.  He had a knack of getting to the issue by just a single look.  She needed that and so much more from him right now.

"She's dead."  Laney's voice sounded so dull and robotic.  No emotion, just matter of fact.  Not at all like the vivacious person Abigail called her.  Laney sobbed uncontrollably at the simple memory.  Funny how the small things can really set a person off.

"He came for her.  Her of all people.  He wants to hurt me by taking the ones close to me away."  Her crying became more frantic and hysterical.

"Laney, baby, calm down."  Eric's soothing voice calmed her nerves to some degree but he realized she needed a gentle nudge.  "Honey, go take a bath.  I'll finish dinner and then we'll discuss this.  Together."

"Go soak in the tub, please.  Let's figure this out later."  A gentle smile spread across his face.  The genuine gesture definitely had the impact on Laney which Eric wanted.

His hands turned her body towards the bathroom.  He guided her into the room, then ran a hot bath for Laney.  As Eric left Laney alone, he silently prayed the bath would miraculously wash away the day's nastiness for her.

While Laney bathed, it seemed like a lifetime flashed by for her.  Although a short period of time went by, the water's warmth eased some of the tension from her body.

Without realizing it, she exited the bathroom and stood naked in the Eric's room; she eyed her duffel bag on the bed.  Eric must have brought it in here for her.  She opened it up to put on something comfortable.  Yet as she took out a pair of flannel pajamas, her mind thought only of Abigail.  Laney's eyes teared up again and she sobbed uncontrollably.  She bawled from the deep pain of loosing her best friend.  Loosing her too soon in life.  Loosing her in such a gruesome way.

Eric heard the agonizing wails throughout the house.  Since dinner was prepared and being kept warm, he was no longer in the kitchen.  He decided to clear his head with a quick cardio workout on the treadmill.  Knowing most likely that Laney needed time to get her thoughts together, he didn't want her feeling rushed with anything, even dinner. Yet, when the sound of her frightful screams tore through the house, he dashed to her without hesitation.

As he entered the bedroom, the sight of her balled up and sobbing on the floor ripped at his heart.  She was so strong and resilient.  He'd never seen her so broken.

When he reached her, Eric knelt down and gently pulled Laney up.  "Sweetheart.  I'm here.  I'm not going anywhere.  Let it all out, baby."

Laney's tear-stained face and bloodshot eyes locked onto Eric's calming demeanor .  It was then she realized that she could and would never send him away.  He was as stubborn and bullheaded as she was at times.  He wouldn't allow it.  Besides, together they made an unstoppable team.  His strength and logical mind eased her frustrations and fears.  He alone.  Nothing else and no one else.

"Of course, baby.  I'm not letting you go either.  Besides, neither one of us would allow that to happen anyways."  He kissed her forehead as he wrapped his arms around her body.

Laney clung to him as if he were a life preserver.  He was her rock, especially when it came to dealing with the nightmares from her work.  "Never letting go."  She whispered into his ear.  "Never."
Posted by J D Elliott at 11:29 AM