Today on the blog, I welcome a newly published author as my special guest and he's male at that!  I'm really excited about introducing Frederick J Arceneaux to everyone.  Fred is a member of two Romance Writers of America chapters, the Heart of Dixie and Southern Magic. His debut novel, "MIRRORED" is a supernatural thriller which will leave the readers a little frightened; yet, begging for more.

Thank you, Fred, for joining us today.  I greatly appreciate you taking the time to answer some questions about your writing journey and process.  With that being said, let's begin!

So Fred, was your road to publication a delightful stroll in the park or a tiring jog over hot coals?

My road to publication was long and difficult. It took me 8 years, 7 of them learning the craft of writing and discovering my signature writing style and genre.

I know I love to write while I sit in my favorite over sized chair.  Where is your favorite place to write?

In my study at home, very few distraction.

How likely are people you meet to end up in your next book?

Very likely indeed, most of my characters are taken, from people I meet in real life. Some of them are composites of two or more individuals.


Speaking of books, here's a sneak peak of "MIRRORED" for the readers:

Christine Albright was, drawn into the center of an eight- year old double homicide while furnishing an old Thibodaux, Louisiana plantation house under renovations. The only survivor of the attack on her family, then eight -year old Celestine Badeau is now sixteen and being, pursued by the demon sent by the vo doo woman Old Tre intent on killing her. The mystery of these murders exposes Christine’s dark past, being, possessed by a demon as a teenager. The accidental meeting between Christine and Celestine sets into motion horrors straight out of Hell. Their only defense is their faith in God. 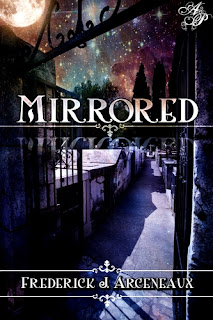 While the events of that day were far from ordinary for the fourteen-year-old girl tied to her bed, for Father Victolini they were all in a day’s work. His calm, however, did little to ease the mind of the girl’s mother. Although only thirty-nine, lines of weariness and distress etched Cynthia Albright’s cheeks, and she grasped the priest’s arm in a gesture both pleading and full of fear.

“Father Victolini, do something.” His hand covered hers, white against the austere blackness of his sleeve, as it clutched him, and he squeezed gently in a gesture of reassurance. “Cynthia, I promise I won’t give up until Christine is freed. But I caution you, cases such as your daughter’s often take days to resolve.” He looked over at her husband. “Robert, take your boys downstairs, and don’t let them back up tonight!”

The older boy, seventeen-year-old Bobby, protested as he pulled his arm free from his father’s restraining hand. “No! She’s my sister, and I can’t leave her, not while she’s like this.”

Father Victolini caught Bobby’s eye, his look stern yet compassionate as he spoke to him. “Tonight will be too dangerous for you and your family. Take your brother, Steve, and stay downstairs. No matter what you hear, do not come up here! Do you understand me?” Bobby knew by Father Victolini’s tone that he had no choice but to obey. Stubborn reluctance etched on his face, he led his brother down to the sitting room, followed by their father, and the three of them sat without looking at one another. Robert quietly instructed them to take out their rosaries.

As the sound of their strong voices lifted in prayer, the hallway lights outside Christine’s bedroom suddenly went out, leaving Cynthia and Father Victolini temporarily blinded by the unexpected darkness. From inside Christine’s room, an unnaturally deep, coarse, guttural male voice said: “Come in Priest. I have been waiting for you.”

Cynthia looked at the priest, tried to say something to him, but the shock of that unearthly voice stunned her senses and prevented her from getting a sound out of her throat.

Father Victolini sighed and let his eyes adjust to the darkness as he slowly entered the room.

Once inside, he heard the bedroom door slam shut behind him and whirled around to grab the door handle, turning it as he attempted to open the door. It jiggled but remained, to all intents and purposes, firmly locked.

“Father, open this door! Why did you shut and lock it?” Cynthia’s frantic voice rose in evident fear, then she called out to her husband. “Bob, get up here. Father Victolini has locked himself inside Christine’s room.”

Bob Junior and Steve bolted past their father, headed for the stairs, but their father’s stern command stopped them in their tracks. “Hold it, boys. Stay down here, and keep praying. I’ll take care of this.” Robert ran up the stairs to his wife’s side and attempted to open the door. “Father, unlock this door now!”

Bob rushed to the end of the hall and into the master bedroom. A moment later, he came back with the key and inserted it into the lock. The key turned easily but the tumblers did not, and he scowled his bewilderment and rattled the handle in frustration. “Father, the door is unlocked.”

“Be patient, Bob. The door will open soon.”

Father Victolini turned to the figure lying in bed. He knew it was Christine, but it did not look like her. Staring up at him was a voluptuous blonde in a nightgown with her hands and feet tied to the bedposts. The figure spoke with a soft and seductive tone.

“Father, come closer. You like what you see; you used to. Come closer and untie me so I can give you what you’ve not had in years. You loved it and took it as often as you could. Don’t you still miss it? You can have it again.”

Father reached for the crucifix hanging from a cord around his neck. “May God rebuke you for tempting me and possessing this innocent girl.”

The thing that controlled Christine’s body ignored Father Victolini’s commands. “Innocent? Who is innocent? Look at me, priest. This is what you crave. You couldn’t get enough when you didn’t have that collar around your throat.”

The thing had the appearance of sensual lust and Father Victolini struggled within himself to resist its temptations. “In the name of Jesus Christ, I command that you depart from her now!”

At these words, the figure in bed changed back to Christine and called out to her mother. “Mommy, come here and help me. It’s gone, and I’m okay now.”

The bedroom door instantly opened, and Cynthia saw her little girl. She looked tired but appeared normal. Cynthia rushed past Father Victolini to her daughter’s bedside.

“No, don’t; get away from her!” Father Victolini shouted a warning, but too late. Her right wrist freed, the figure in bed struck Cynthia across her face and blood welled from a long scratch to run down Cynthia’s left cheek. She looked bewildered, and small wonder. Her daughter would have never done such a thing. Repulsed, she jumped away with her gaze fixed upon Christine’s face, which was suddenly dry and covered with fine scales, having a serpent’s open mouth with fangs ready to strike.

Wow! That's some beginning chapter you have there, Fred.  It definitely grabs the readers up front and center.  Well I can see why your publisher, Astraea Press, snatched up this gem of yours.  On that note:  What was the best advice you were given leading you to getting published?


To stop trying to force my writing into a genre I’m not good at. To write from my heart those genres that I enjoy. Less than a year later I sold my first manuscript.

Sounds like some excellent advice was given to you.  I definitely agree that authors should write what they love.  Ok, one last question for our readers, please.  This one is unrelated to writing.  What music are you listening to lately?

Oh yeah, you can never go wrong with some classics in the mix.  Those two decades contributed some of the best music for that era and future generations.  I love listening to some Elvis and Ray Charles as well.

Thank you, Fred, for being my guest today.  I thoroughly enjoyed having you for a visit.  Please feel free to come by anytime.

You can learn more about Frederick J Arceneaux and the purchase of "MIRRORED" by visiting his website and the following links: