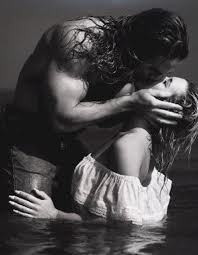 Although the island's exotic allure transfixed Rafael and Hannah, neither one of them yearned to call the place their new home. Shipwrecked for almost two weeks, the lost couple became disillusioned about ever being rescued.  The beauty of the island seemed too serene for them.  Both couldn't deny the appeal of the island's mysterious sensuality.  The underline current of danger and sexual energy surged through the air.  It stirred even the most docile animals into a frenzy, let alone a man and a woman with intimacy issues.

As Hannah sat on the white sand beach, the tropical winds wisped her sun bleached hair against her cheeks.  Her mood sobered with thoughts of their current situation.  Stuck. Lost. Forever gone from home and loved ones.

She continually combed her fingers through the grains of sand.  The motion soothed her uneasiness to some degrees; yet, her anxiety level peaked daily within her soul.  The need to be off the island gnawed at every fiber of her being.  Her mental and physical state grew more unstable and unhealthy with each passing day. Hannah didn't know how much more she could take of the deserted island, especially being stuck on it with Rafael Ramirez. The man reeked of chauvinism and arrogance.  Sure, he was a sea captain and had a lot of knowledge of the open sea and various exotic places around the world but Hannah cringed every time he opened his luscious mouth. She hated the fact that she even noticed his lips, and even worse was how each word sexually stimulated her as they tumbled out of his mouth.

Hannah's hands fisted in the sand as she heard his deep Hispanic accent.  That voice should be illegal and definitely not on a male as attractive as Captain Rafael Ramirez.  He embodied everything she vowed to stay away from all of her adult life.  Arrogant.Wild. Handsome. She'd learned the hard way that those three combinations were dangerous when it came to men.  Oh and the fourth thing to stay away from was most definitely...dangerous.  Yes, Rafael Ramirez was one dangerous man.

Liquid heat instantly pooled between Hannah's thighs when she heard Rafael speak her name.  It was a good thing there was a breeze blowing other wise she'd probably melt right there on the beach.  Although she wanted to be left alone, she didn't want to appear rude.

"Are you ok?  I know this isn't an ideal situation but we are on an extraordinary island.  Are we not?"  Rafael stretched out both arms indicating the island's beauty and vastness.

Hannah snorted.  "No I'm not ok, Captain.  I'm missing home.  I'm ready to get off of this rock."  Her toes bunched into the sand as her fingers remained fisted.

"You're frightened, Senorita Hannah? Of this island?"  He eyed her curiously.  His sharp eyes keyed onto her body's reactions.  He sensed deep fear and tension within her.

Hannah stared out across the ocean's horizon.  The rhythm of the waves crashing against the shore hypnotised her. That was fine with her.  She wanted to be hypnotised and 'lost' in the moment.  She wanted and needed to forget about the horrors of the past week.  First, there was the loss of the crewmen and the ship during a hurricane.  Then she and the captain barely survived the wrath of the ocean and came upon this strange and mysterious island.

She couldn't quite put her finger on it but something wasn't quite right with the island.  It didn't help matters either that she experienced strange and evil nightmares every night since they washed upon the shores of this mysterious place.

Her nightmares consisted of a creature with glowing crimson eyes with large canines.  Each nightmare involved the creature mutilating someone.  Sometimes, Hannah knew the person.  Sometimes, she didn't.  Either way though, it was highly disturbing to her.  Hannah shivered as she relived that horrors from each person's death.  Their screams of terror echoed through her head.  Every night she had nightmares.  Every night she dreaded the dark.

Bittersweet emotions ran through Rafael as he heard Hannah say his name.  Pleased because she actually spoke his given name; yet, distressed that she said it due to her overwhelming fear.  He hated to see her so frightened about their situation.

"Hannah, don't be frightened.  I'm here and I will never leave you unprotected."  He laid his hand upon her shoulders to caress and ease the tension out of her.

Instead of helping though, it made things worse.  Hannah leaped up and swirled around to face Rafael.  "Don't!  Don't touch me.  It doesn't help."

Baffled by her reaction, Rafael dropped his arms to his sides.  "I didn't mean to offend you.  I only wanted to offer comfort.  I see that me doing so only caused you more anxiety.  I apologize."

Screaming, Hannah fumed at Rafael's words.  "Stop it! I don't want apologies. I don't want your protection.  I just want to go home!  I need to go home!  Hannah's words trailed off as she bolted towards the ocean.  Her skirt swished against her sun kissed calves.  Ordinarily, Rafael would have thought the sight was damn sexy but then he realized she dove head first when she ran out into the shore line and began swimming out into the deep.

Fuck.  Rafael made a mad dash after the hysterical woman.  Adrenaline pumped through his veins and heightened his senses.   What the hell was she doing?

The waves smashed into him as he reached for Hannah's leg.  They both were knocked under by the powerful force.  Rafael kept a tight grip onto Hannah's leg as he tugged her tightly to his body.  As he swam back to shallow waters, she flung her arms out, kicking and spewing water from her mouth.

"Leave me alone, Rafael!  Let me be, please!"  She pushed him which caused her to land butt first on the shallow bottom.

"Damn it, Hannah! You just can't swim across the ocean.  Be sensible for God's sake.  Are you deliberately trying to kill yourself?  Are you?"  As Rafael asked the questions, he saw the answer in her eyes.  Damn.  "Why, Hannah? Why would you do that, sweetheart?"  He towered over the wet and distraught female.  His breathing ragged from the high adrenaline and assertion.

Hannah's head jerked up and locked onto Rafael's eyes.  The term of endearment threw her off balance.  If anything it calmed her nerves.  She didn't understand why that one word settled her but at the moment she didn't really care.

Reaching up and grabbing onto his thighs, Hannah needed to pull herself up.  She needed to be closer to him. She needed him.

Rafael's breathing slowed down with each tentative movement Hannah made towards him.  He watched her intently with the eyes of a predator; yet, he wanted to protect her not devour her.  Or did he?  He honestly didn't know at the moment.  Although, every fiber of his being ached for her and wanted her as his own.

Holding her head within his two hands, he bore his eyes into hers.  "I'll keep you safe. You have nothing to fear from me, Hannah. Ever."  At first, his lips brushed gently against hers but then he boldly staked his claim by possessing every inch of her mouth.  She was his and he would protect her with his life. No matter the cost.

As Rafael held onto Hannah and silently prayed for a miracle, his eyes searched the jungle line for any potential danger.  Within moments a menacing howl echoed from the jungle forest and reached out to the sea water.  Closing his eyes, he feverishly kissed Hannah.  She kissed him back with great intensity as well, until she stared into the crimson eyes from her nightmares.