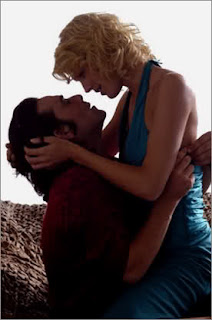 Once her heart's door opened, Keri gave all her love. Not willing to back down from mixed emotions, there was no turning back for Keri. Yet as she stood in the door way, the proof of her careless actions sunk in as she watched her best friend, lover, and soul mate shattered from pain. Pain which she caused. She grimaced at the thought. Stupid bitch. What had she been thinking?


Legs shaking, her walk slumbered like one going on a death march. Maybe she was. In all her existence, love eluded and confused her but not with this man. He alone broke down all her defenses and years of pain. With a quick glance, a brief touch, or a single word; this man melted her insides. Treating her like she mattered, he alone filled her; emotionally and physically. He treated her like she mattered and she was his world.

Then in one swift instant, everything shifted. His views on her and their love changed forever. She catapulted the relationship, just not in the direction which either of them dreamed. Not anyone or anything else. She alone shattered his trust and love. Pain ripped through and shredded her heart; yet, it didn't even come close for what he endured.

Her blue dress rustled against her skin as she drew near him. Taking slow deliberate steps, the silk fabric caressed her as a tentative lover. The irony of that thought hadn't escaped her. He bought the dress for her after their frantic love making in a boutique's dressing room. Goose bumps rose along her arms and thighs as she savored the cherished memory. Shaking her head, she didn't have the luxury of reminiscing at the moment. Focusing on the task at hand was pertinent. That task included groveling if necessary.

The tension between them polluted the air. Although they were only mere steps away from each other, the emotional distance spanned the vastness of a galaxy.

Acutely aware of the need to confront her fears, Keri swallowed the hard lump in her throat. Licking her dry lips, she watched the man she loved. Wetness formed behind her eyes as she surveyed his demeanor. Head hung low and broad shoulders humped over the desk. Damn, he looked tired. Second guessing her decision for coming, Keri slowly turned towards the exit.

Renn's head throbbed from all the shit played out lately. Hell everything throbbed. What the fuck? Yeah, the tequila definitely made a deal with the devil last night and kept Renn oblivious....for a little while.

He titled his head as a faint sound whispered into his ears. Keri. God, what to do? Not sure knowing the correct action to take, really pissed him off. Being in control suited him. Being hung over was not being in control, far from it.

As Renn turned his head, his peripheral vision caught the movement of blue. Was she leaving? What? Why? Mind numbing confusion and fear gripped him. Fear of her walking out and not returning...to him.

"Don't." The one word echoed through the dim lighted room.

Keri abruptly stopped at the sound of his voice. Thinking she may have heard wrong, her nerves jacked up with a deep ache and dread. Don't what? Stay? Go? Fuck....not sure, she forced her ragged breathing to slow down. Hard thing to do when two different life scenarios instantly flashed through the mind. One play of events, she prayed like hell wasn't the case. The other, well, it all depended on the next few moments.

She cleared her throat before she spoke. "I'm sorry. I didn't mean..."

"Don't, Keri. Stop the apologizing." Renn rose from his desk chair. The movements deliberate and slow. He forced them to be. Hell, he couldn't control a lot of things in this world but he sure as fuck would control the actions of his body. Well, not exactly all of them. Evidently his cock had a mind of its own. So did his heart. Damn it.

As he approached the woman who owned his heart, every bit of anger and hurt clashed with his burning passion for her. Yet, his pride struggled between caressing or strangling her. Although, some sexual fantasies involved both for some people but not with Renn. His fantasies regarding Keri involved slowly penetrating her pussy as he's eyes locked onto hers. Steely blues vs. baby blues. Not at all an apocalypse by any means but an epic tale of two souls coming together in every true aspect.

Renn's chest tightened at the sight of Keri. God, he loved this woman. His woman. How and why could he ever consider letting her walk away from him? Never. Realizing in that instant he had to make a choice, he chose her. His love and his happiness along with hers. Hell, she wasn't perfect, neither was he; yet, together they were unstoppable and made a formidable team.

As their eyes met, their love for each other spoke without either of them saying a single word. He stretched out his arms to draw her into his welcoming embrace. Instantly Keri's body shook from the raw emotions clawing at her.

"Is it?" Her voice trembled. The fear evident in those two words. "I never meant to hurt you, to doubt you or us."

Logically he knew everything could not be corrected in that moment but as he kissed her forehead, he also knew that nothing would stop his love for her. He owed it to himself to pursue the possibilities of a fabulous life with Keri. One stupid lapse in human error didn't call for either of them to throw in the towel, especially when they were on the verge of a new and wonderful journey together.

Tears spilled from her eyes. "Yes, more than anything in this world."

"Good, 'cause I love you." Renn's voice cracked from hours of drinking but he needed to say what was on his mind and in his heart. "Yes, I was hurt but I also hurt you too. We're not saints, baby. Yet, for some reason I forgot that. Forgive me for putting so much pressure on you. On us."

"Forgive you? Yes, of course, but there's really no need. Please forgive me, sweetie. I..."

Interrupting her, Renn brushed his lips against hers and whispered. "Stop. No more. I love you. You love me. I forgive you. You forgive me. Let's not mention it again."

Keri's heart burst with happiness. Throwing her arms around her man's neck, she kissed him back with all the deep intensity from within her soul. "Never. Again. I love you, Renn. Always."

Renn's heart warmed as she spoke those words to him. He'd never let her go. Hell, he'd move Heaven and Earth to have her by his side forever. "No. Never. Again. I love you, Keri."

Although the unknown was scary when it involved love, both willingly gave each other an unspoken promise of commitment, love, and trust as they embraced. Neither one of them could think of a better way of starting their lives together.