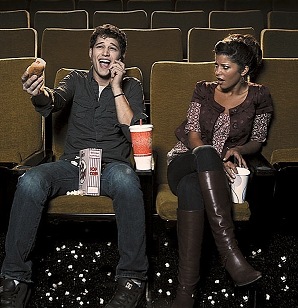 With the progression of our society in regards to technology, is it any wonder that we're losing touch with our humanity.  Look around you, people text and make phone calls while in the movie theater, during a conference, church, and while having dinner with family and friends.  Technology has its benefits but when it interferes, disrupts, and hurts our relating to other human beings then it becomes a nuisance.

Many times I've heard a cell phone ring during a conference, church service, or school lecture and I think...seriously?  What is wrong with people?  When a person thinks that the whole universe revolves around him/her, then it should be no surprise that our society has become more cynical, more narcissistic, and less compassionate and considerate towards other human beings.

Twenty years ago, we didn't have the technology of what we have today; yet, we survived without having to share our life story to every 'Tom, Dick, and Harry' every twenty seconds of every day.  We also didn't take for granted the actual people around us.  I mean, think about it.   How often do you see people out eating with a group of family or friends but someone or several people within the group are texting or talking to someone else with the cell phone?  Or a person is on a date with his/her significant other and one of them is spending the so called 'quality time' on updating their facebook/twitter/myspace status?  Sadly, I'm sure we've all seen it or its been done to us or even by us. 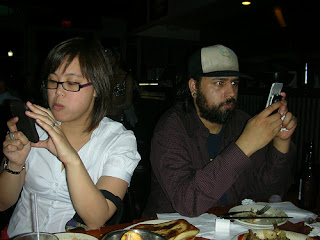 I consciously turn off my cell phone when I go into work/school/church/movie theater or any place where someone is giving a speech to an audience of spectators or guests.  It's common courtesy, polite, and it makes sense. Nothing is so important that someone needs to get in touch with me within an hour or two or even more.

I don't mean to sound uncaring or rude but if someone dies or is in an accident; and someone else is trying to get in contact with me regarding the tragedy; me receiving the news any sooner doesn't change the fact of someone getting hurt or dying.

Example of this was when my brother died unexpectedly in a car accident.  I live out of state from a majority of my family. At that time, I worked at a preschool with children during the day and I had my cell phone off.  When I am with the children, they are my first priority.  They need me at that moment not anyone else.  When I got off work, I turned on my cell phone and had several messages to call 'so and so'.  No one mentioned anything on my voice box about my brother.  When I got home, the answering machine had the same messages.  The point is that me knowing sooner about my brother didn't change the event and I still wouldn't be able to do anything about it especially living out of town.  Yes, it was the worst phone call I have ever received in my life; however, me finding out while at work wouldn't have changed the outcome.  The children would've been frightened and upset when seeing my reaction to such terrible news and that wouldn't have served any purpose.  I don't have any regrets about that because my brother and I had a great relationship and he knew my feelings and vice versa.  He would have done the same thing.

Anyway, the overall point is to be consciously aware of the people with you at the moment not someone or something else on the cell phone or blackberry.  Enjoy the people while their with you and be in that moment.  Turn off the cell phone/blackberry, etc.  You can check messages later.  The people around you will appreciate it because it tells them that they matter to you and what they say matters.  It's also polite to pay attention when someone else is speaking and giving them the attention which they deserve.